We have had alot of requests for Post Apoc stuff, so I started thinking about who I would like to sculpt them. I called my old buddy Bobby Jackson (Bobby did the Leonidas and Spartans for us in 28mm) and asked him what he thought about the project. He was up for it and so we started coming up with some ideas.
The first 2 packs we are releasing in this line are the Post Apoc Paramilitary group and the "Gangers". We have not thought of any clever names yet, but we are working on them.

First up is the Paramilitary pack: 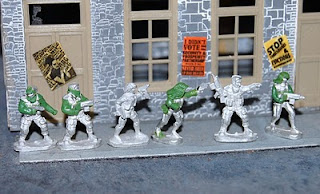 This is basically a rag-tag group of Ex-Military trying to survive in the hostile world after the great Apocalypse. 12 in a pack.
Next we have the Gangers pack.

This pack is full of crazies... You got hockey masks, mohawks, bikini briefs.. This spack is a snapsot of some of the gangs harrassing unlucky survivors after the Apocalypse. 21 in a pack.
Both of these packs were done by Bobby and I really like them. Now I know what you are thinking, what  system will I use these in? I am glad you asked. These packs and alot of our horror packs will be perfect for the Two Hour Wargames new post Apocalyptic game After the Horsemen. Here's the cover: 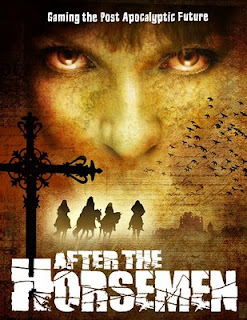 From the creator of All Things Zombie, you know this is going to be awesome! Ed puts out some great stuff and this may top them all!
Ok, that's all the updates I have.. back to the workbench!
Thanks!
Posted by RebelMike at 11:13 AM 4 comments:

Bikers up on the site, plus some new items

Per the many requests, I have put the bikers up on the site. I'll have painted pics soon.. don't worry.

More updates later today when I get some pics taken ...
Posted by RebelMike at 6:52 AM 1 comment:


So, I got some pictures today I thought I would share. These are some WIP greens of the new Titan Marine Heavy Weapons team. First up, Titan Marine with Missile Launcher: 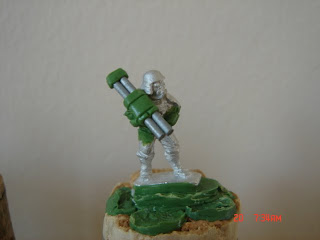 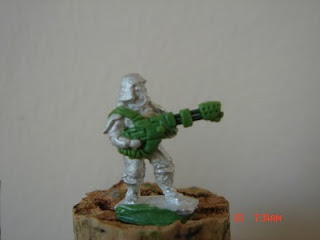 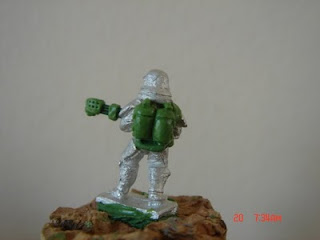 and the Titan Marine Sniper: 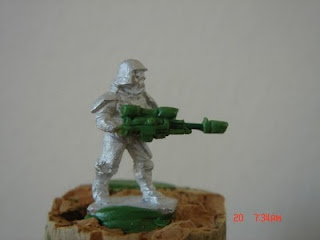 Pretty Cool, huh? I expect to have these ready in about 2 weeks.
I also got a chance to take a picture of the metals of the 15mm modern Biker Gang. Sorry for the crappy picture. I hope to have them available next week. There are 5 in the "gang". They are armed with Shotguns, pistols, chainsaws and chains. There are 2 different Bike styles. Martin sculpted the men and John did the motorcycles. Awesome stuff!

More stuff to post tomorrow!
Thanks!
Posted by RebelMike at 7:01 PM 2 comments:

Getting the Mass Effect

So I just got these pics in and I had to share them. One of our customers, Eddie, said he had painted his Earth Force Infiltrators in a Mass Effect scheme. Since Mass Effect is one of my favorite games, I was excited when they showed up in my inbox. Take a look: 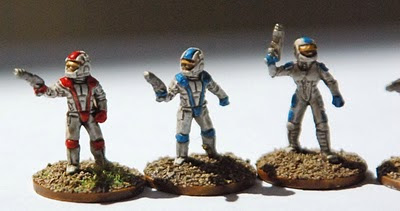 Nice job Eddie! Right now I am using the Infiltrators as Recon/Scouts in my Army with a normal camo pattern, but has given me some great ideas!
Thanks!
Posted by RebelMike at 7:08 PM No comments:

I have to say it! Jeff has done it again! I just got these pictures in from Jeff and they are amazing! I asked him to paint these base models and I was floored how they turned out. Here are some of the Shots: 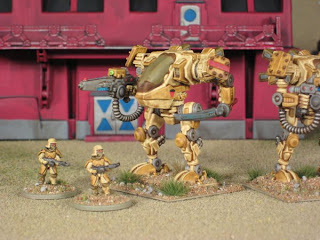 Those Titan Marines have some support now! 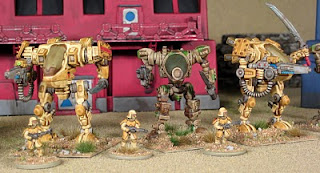 A shot to show them next to the EF HAMR. 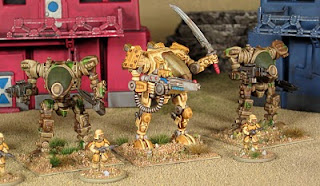 Amazing stuff Jeff, thanks! You can see more of his Titan HAMRs at: Jeff's Titan HAMRs Right now I am getting all the support HAMRs set up in molds, so I hope to have more info out on them soon.
Thanks!
Posted by RebelMike at 6:06 PM No comments:

Most of you know I have been talking about Sprues for a HAMR suits since we released them. Well, I just got some photos of the sprues and I thought I would share. We don't have any pricing yet, but I hope to have them released soon. John did a kick ass job on these, so I am really excited about getting these on the table. So here we go.. 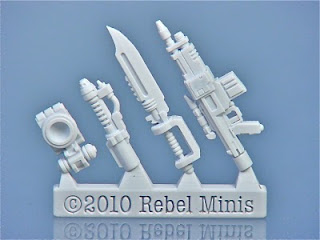 Here is a nice bits/parts sprue for the EF HAMR. The first piece on the left is a connector bit that mounts on top of the EF suit and holds the 3 missle system piece from the Gunship. Almost all of our Sci-Fi line is compatible and modular. John and I designed it that way.. well, John did, I just approved it. The next piece is a flamer unit that mounts on either arm. The Combat knife is a nice bit for deco or for conversion, as is the Rifle. 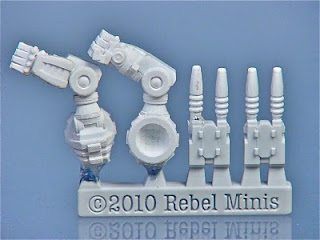 Here is a set of arms with 2 supression guns/lasers that mount on the forearms. It can be used for the TITAN HAMR as well. 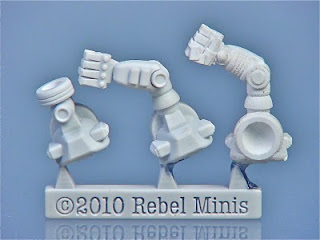 Here is another set of arms with a nice modular shoulder bit. This shoulder piece will allow you to mount the large Laser from the Gunship, the Gatling-gun and a few other pieces. Sort of like this: 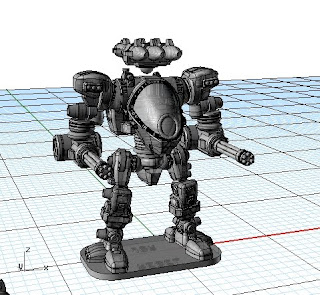 Also, most of these will work on the Titan HAMR as well. And speaking of the Titan Sprue.
Titan HAMR Sprue 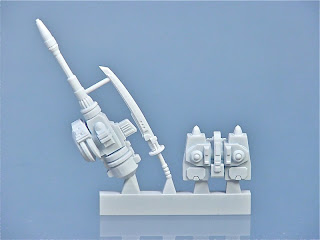 Here is the Titan sprue. Basically, you have a Big Laser cannon, a Katana bit and a Missle Rack that mounts on the top. One build could look like this: 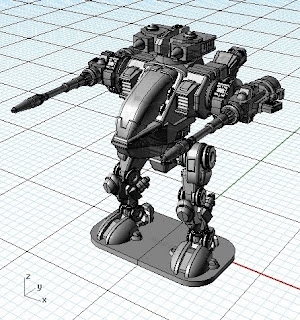 But like I said, there are alot of ways you could "Kit out" your HAMR.
Stowage
Here is also a neat Stowage pack we will be offering. 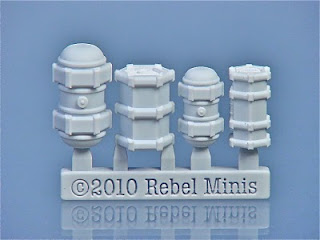 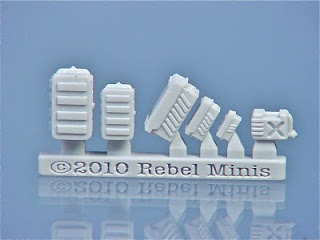 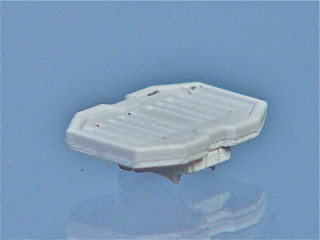 Stowage Deck for EF Titan
That works like this: 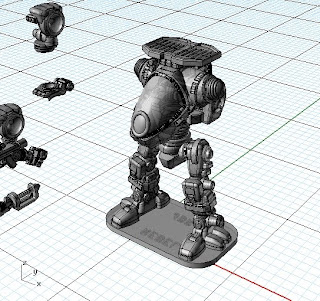 Whew! This update wore me out, but I am really excited! Like I said, I hope to have more info soon...price and pack designs...but I thought you all would like a sneak peek. We have alot more HAMR options on the design table, but if you have any ideas.. we would love to hear them!
Thanks!
Posted by RebelMike at 9:43 AM 3 comments:

I have had some people asking about our upcoming 6mm line, so I thought I would throw up a sneak peek or two. Below is a look at the 6mm Earth Force line. All of these were sculpted by master talent John Bear Ross. 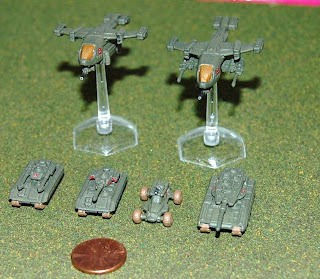 Right now, the Sahadeen, as Martian insurgents, don't have any vehicles. Luckily, the Titan Marines have come prepared for battle. This is a look at the new Titan Marines Grav Tank Assault Force in 6mm. 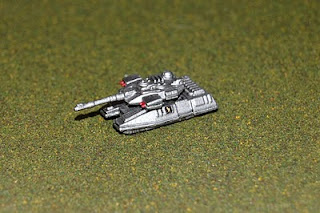 We are working on molds and coming out with a release schedule, so I am hoping to launch this line sometime early summer. We will also have packs of 6mm scale infantry for most of our factions. I hope to have more info soon.
Thanks!
Posted by RebelMike at 4:04 PM 5 comments: