So my brother Scott and I got to do some gaming this weekend. Lately, we have been playing Modern Havok, the modern Skirmish game we are coming out with soon. It is based on the Two Hour Wargames Chain Reaction System. We both play All Things Zombie alot, so this was easy to pick up. We went with a bank robbery scenario and Scott chose the robbers as gangers. I was playing law enforcement, so I went with some 3 regular beat cops and 3 SWAT with the higher reps.
We called this Hell's Kitchen. 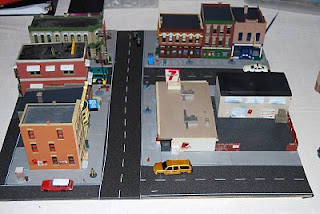 This is a shot of the Board. It is a 2x2 and everything is mounted on the square. It makes it easier to pull out quickly and get into the game. I have more boards I am working on that will slide into this for a bigger map. 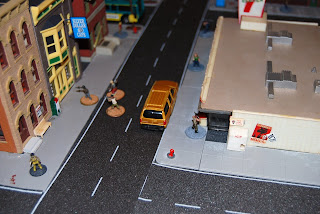 Here Scott pulls up across from the bank and rushes in. He leaves the Driver in the vehicle and has a lookout across the street from the bank. There are no suspicious moves made yet, so I don't activate. 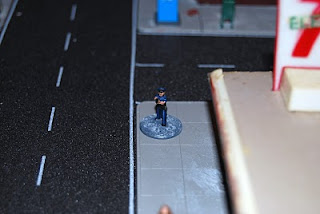 Officer Dano activates and starts to investigate the parked car. 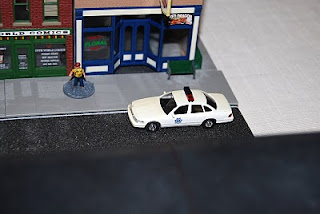 Back up is a block away at the Red Dragon Martial Arts den. 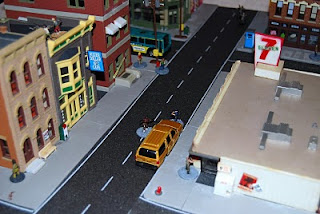 As he moves up to the car, he rolls his insight test and passes both, but the Ganger lookout Panics and snap fires. All Hell is breaking loose. Dano starts taking fire and is forced to duck back but is HIT and Stunned! 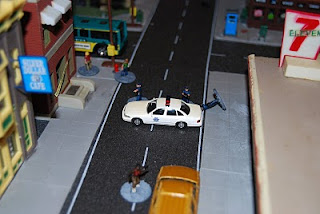 Back up arrives and have blocked off the road. Scott doesn't activate and it allows me to call in the SWAT. Who have aparently a crappy driving skill :) 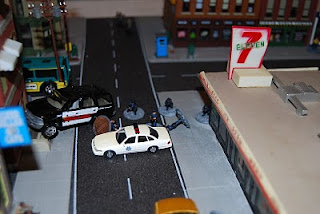 The firefight has gotten ugly. The Gangers are exiting the building and with a few lucky shots (I mean, the guy was dancing through a storm of bullets) a ganger shoots Officer O'Malley... DEAD. 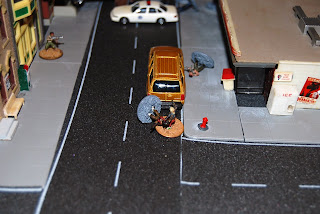 Now it's On Like Donkey Kong! Gangers start dropping and two gangers make a break for it down an alley past the 7- Eleven. 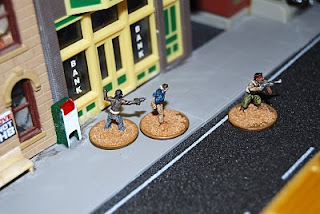 It was about this time, Scott brings out his Leader, out of the bank with a HOSTAGE! We immediately call a cease fire. Dead hostages are a bad thing. 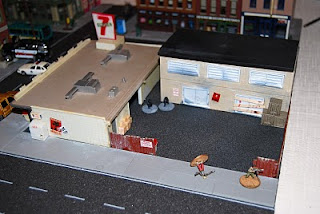 While the stand off was going on, the two punks were still trying to make a get away. I sent two SWAT to intercept and got an in-sight on them as they ran across the parking lot. Braaap! One ganger is down! But not before a SWAT member is Knocked down. :( 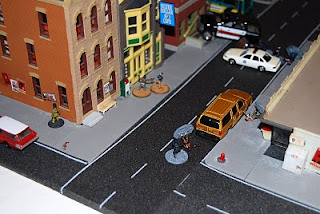 My SWAT team member then moves into posistion behind the gunman and the hostage. He is given the word and , Pow!, the gunmen is killed(obviously Dead) and the hostage is freed. 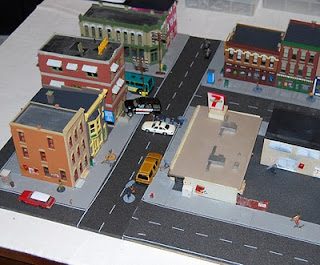 \
Just another day in Hell's Kitchen.
We had a great game. Afterwards scott and I agreed he should have used the vehicle to ram the cop car and gotten his gangers out faster, but he was seeing what I was going to do and once the SWAT arrived, he was outta options. He did have one ganger make it off the board who has sworn his revenge!
Good Times! 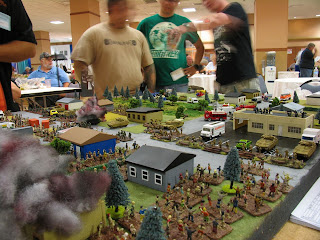 Well, as most of you know, I have been pretty busy lately. I am jammed up at the real job and by the time I get home, I am worn out. That being said, I finally got some of the new packs inked and up on the site for ordering. I am going to try and get some painting done this weekend.,.. I hope :)

So, here are pics of the new stuff and some ramblings. 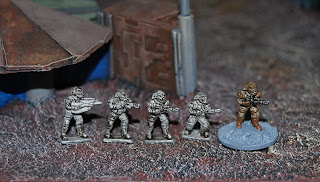 I wanted some Aliens with character that we could play has an aggressive, mindless race.

Piers suggested the name and I like it.
Sons of Thunder 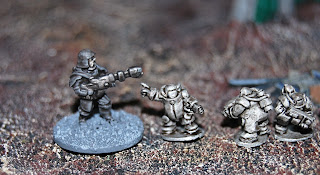 Genetically-altered terraforming workers who decide to revolt against "The Man".
What's not to like? We have a bunch of new packs planned for these guys. Around here we call them "SoTs".
15mm Cavemen 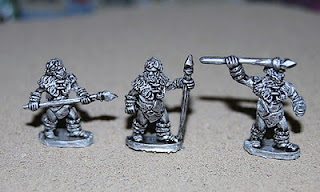 We did these guys for an upcoming Two Hour Wargame box set for the Larger Than Life System. I have been playing alot of Pulp lately and I love it. It's a nice break from the modern and Zombies. 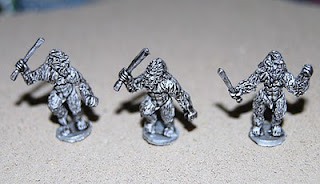 Also for a Box set for Larger Than Life. Jason calls them "Bigfoots with clubs" and we actually ran a scenario where they attacked a small town in Canada. for those keeping score at home, I lived :)

You can see all of these on the site: http://www.rebelminis.com/
I'll try and get pics of some of my games this weekend.Oh, and if you get the chance, check out Larger Than Life over at Two Hour War games here: Larger Than Life
Out.
Posted by RebelMike at 5:29 PM 5 comments:

I was pretty excited this week when Jake sent over the painted Raptorz. I have wanted an mindless( or are they? ) alien life form to hunt down my sci-fi humans, and these guys are awesome. When I saw Jurassic park for the first time, I could not get over how fluid the Raptors in the movie were, so I kept this in mind when we designed the Raptorz. 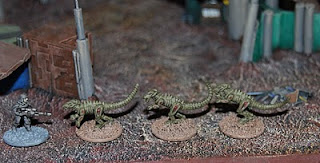 A lotta trouble headed this way!

Ed over at Two war Games is working up the Stats for them now, so expect to be able to add them into your 5150 First contact scenarios soon.
I have been jammed with real life, but I hope to have another update soon!
out.
Posted by RebelMike at 4:32 AM No comments: