The legendary Ninth Legion – Legio IX Hispana (The “Spanish Legion”) – was one of the oldest and most feared units in the Roman army by the early 2nd century AD. Raised by Pompey in 65 BC, it had fought victorious campaigns across the Empire, from Gaul to Africa, Sicily to and Spain and Germania to Britain. In 108 AD the Ninth Legion disappeared...

Now, in the lands of Zatariel, there are rumors of a great Army building in the West. And it's coming...

Rebel Minis is proud to announce a new army we are building for Mighty Armies! The Packs Romana*! This Roman Based Fantasy Army will be coming out soon but we have some packs already available! Take a look: 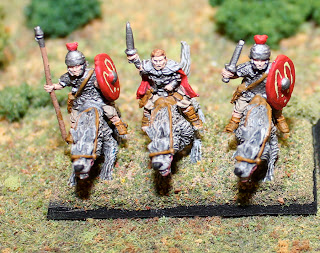 David is painting up the full army, so we should have the Army Box sets up soon! More ways to build your Mighty Armies!