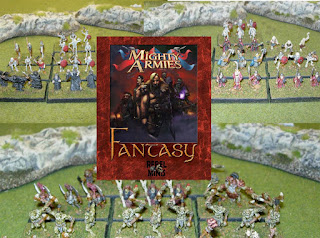 We are proud to announce the release of three new armies for our Mighty Armies system! The 15mm scale armies feature models from Splintered Light Miniatures.  They are:
Azrag's Savage Horde
Cult of the Bloody Sun
Wraith Lord


Each army ships with bases and has a retail of $29.95. These new armies join our always growing Mighty Armies product line. With over 40 armies, you have a lot to choose from! Check them out here:


About Mighty Armies
Welcome to Mighty Armies, the game of clashing hordes, hollow defeats and resounding victories! You will have the chance to build and paint a great force, then march against the armies of your opponents to prove who is the greater general. The rules behind Mighty Armies are very simple and you will find you are playing in no time.

Each Mighty Armies box set contains a complete 15mm army, allowing you to start playing just as soon as you have mounted the models on their bases and given them a bit of paint. Box sets can be combined to create a different mix of units in any given army, or special units can be added with the supplemental blister packs also available.

So, grab your sword, rally your standard bearers and lead your forces to victory
Posted by RebelMike at 3:59 PM