So this week I have a new green to show you and an older green that is about ready to be released.
First up, we have the new Armored Trooper. This is a master we have been working on that features a "tight armored" shell. With is guy we wanted something a little streamlined and not has bulky. 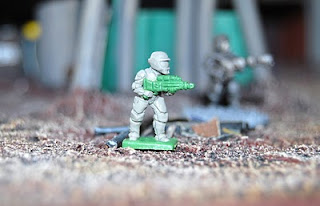 Martin sculpted this and did a great job. We'll have some variant poses and some other weapons choices for these guys.
GILA (Hee-Luh)If you have been following this blog, you've seen this before. This is the Earth Force GILA dune buggy. John Bear Ross did this a while back but we have been tweaking it and designing some new stuff. The GILA will come with 2 Driver choices, EF or Sahadeen and features 3 weapon choices that mount to the top deck. 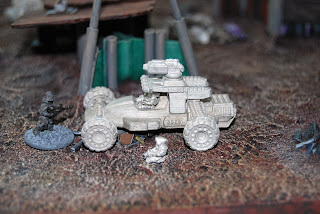 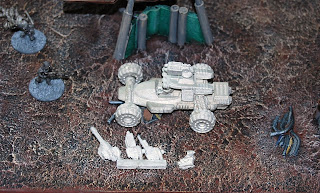 You can see the weapon sprue and the Sahadeen Driver in the picture. I hoipe to have them in a couple of weeks and will let everyone know.
More soon..
OUT!
Posted by RebelMike at 2:26 PM