Here is a little Sneak Peek. This is the new Mighty Armies Necromancer army from Splintered Light Minis. Dave over at SLM sent it over yesterday. This is also the big baddie army in my groups campaign that we are starting.

I am the Campaign Master(CM), so I will be running the NPC, Mercenary armies and local Militias against the players. The Necros army will be 400 points and have 10 generals in different parts of the world. Not all of the "evil" forces are Undead.. Many of the mercs are the Barbarian Tribes from the north and Pirates from the Black Sea.

The Eaters of the Dead Army is the only army I will control that is Neutral. They only be activated on certain die rolls during the invasion the Savanna Lands and villages within the lands. 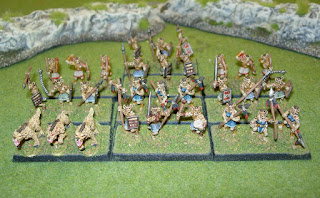 I will hopefully have the map finished soon to show you...

Posted by RebelMike at 8:19 AM