Well, we just got in from Chattacon and I thought I would post a few pics of our Mighty Armies battle. This is the culmination of a MA Campaign Jason and I have been having. We decided to finish it it the show. We have had 16 battles up to this point. Jason's Conquistadawarves has been invading my lands (guarded by my Dwarven Border army and Robin of the Shire- or better know as The Hood)
In the final battle we can choose from units that survived the previous battles to form the final battle. That is Jason's stronghold in the background. 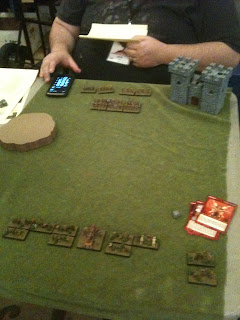 He had some extra dwarven rangers from a skirmish army that made it into this battle. They are in the back. 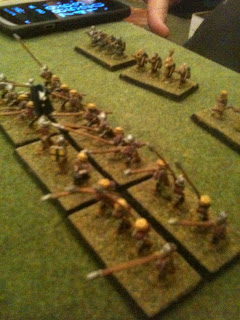 I ran bowmen and scouts as sort of a hit and run throughout the campaign. "Robin" was destroyed twice in the campaign but another Robin soon took his place. That's why he is a man of Mystery!
I did have a Dwarven cannon that survived that I added into the army. We need more power once we came to the plains... 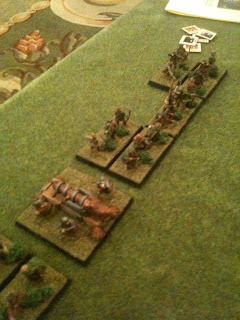 It was a fairly quick battle, the dice were not with Jason :), and here is the shot of his General surrendering to Robin. Jason is emailing me his shots, so I should have some more pics soon. All in all, a great game.. I think I need to add in some light cav...
Off to sleep.... Later!

Posted by RebelMike at 4:23 PM